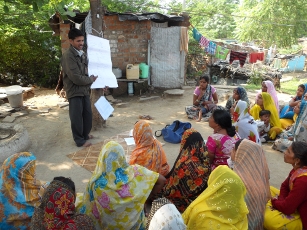 Many women and girls are not aware of laws on violence against women, of their legal rights or how to exercise these rights. Legal awareness is necessary for women so that they can affirmatively claim their rights. With an overall objective of enhancing the level of awareness on their legal rights and provisions of community women, Samhita initiated the Legal Rights Awareness Program (LRAP) in 2014-15. This program also serves to generate awareness among participants about various entitlements available under government schemes and assists them in availing these.

Following are the key components of this program :

1. Trainings on gender sensitization and laws protecting women against discrimination and violence covering the concepts of

Workshops are also conducted to introduce the participants to experts and service providers who they can contact for help. Participants are also taken on exposure visits to various agencies they can approach for help in cases of domestic violence like Police Station, Shelter Home, Labour Office, Women and Child Department Office. Family counselling for dispute resolution, legal advice and legal aid to survivors of domestic violence is also provided. Resource directories with contact details of government offices, police stations, hospitals and service providers working in the area of violence against women are also distributed to the participants.

A total of 65,865 women across 12 districts of Madhya Pradesh and Chhattisgarh participated in LRAP training programs organised in 4 phases.

Trainings are used to identify women displaying keen interest in issues concerning women who show willingness to play an active role in raising a voice on such issues. Once selected, through a well structured process, these leaders undergo a series of trainings to build their capacities needed in their role as change agents.

Local Committees are grassroots collectives formed by women in villages and urban slums to counter violence against women, support survivors, and facilitate better access to services and entitlements. Each local committee shares the common goal of social justice and gender justice. Meetings are organized with the help of Community Catalysts and anchored by Samhita staff. Local Committees have succeeded in ensuring community services such as drinking water supply, street lights, cleaning of public drains, collection of household waste, and functional public toilets.

A total of 373 Local Committees mobilising 4,472 women were formed in six districts (Bhopal, Damoh, Guna, Gwalior, Sagar and Shivpuri) of Madhya Pradesh during the years 2016-2020. These committees are conducting their meetings on a monthly basis.

A total of 7,920 men and women participated in 131 Social Protection Camps organised in six districts (Bhopal, Damoh, Guna, Gwalior, Sagar and Shivpuri) of Madhya Pradesh during the years 2016-2021. The participants accessed 10,137 entitlements linked to 39 different government schemes during these camps.